I haven’t been able to expound much on my views about global warming.  My time tends to be limited, and the topic is enormous in its potential for copious disquisitions.  My position can best be summarised with the following points: (1) we know that there have been several severe ice ages, and (2) this is not one.
Of course the earth warms (and cools) throughout time, and I seriously question the idea that we somehow have an effect on the weather to anything beyond a negligible degree.  We certainly do not have the capability to stop weather change, no matter how many trillions of dollars we throw at the non-problem, beggaring the world economy.  If the planet does warm up the, what, one degree Celsius over the next century, why is that a bad thing?  What would the advantages be, such as longer growing seasons?  Of course, there doesn’t seem to be any evidence that the earth has cooled at all since 1998 (see also here).   Toss in the remarkable examples of fraud and arrogance, and you see a world movement in slow collapse, and rightly so.
At any rate, what caught my eye today was an example of stupendous chutzpah in the Guardian, the premier left-wing newspaper in the UK and as you would expect, a typically reliable champion of the ‘save the earth’ campaign.  I have heard some extremely cheeky stories from the Greens and their ‘experts’, but this one takes a sizeable piece of the cake, in a story labelled "Aliens may destroy humanity to protect other civilisations, say scientists".

It may not rank as the most compelling reason to curb greenhouse gases, but reducing our emissions might just save humanity from a pre-emptive alien attack, scientists claim.
Watching from afar, extraterrestrial beings might view changes in Earth's atmosphere as symptomatic of a civilisation growing out of control – and take drastic action to keep us from becoming a more serious threat, the researchers explain.
This highly speculative scenario is one of several described by a NASA-affiliated scientist and colleagues at Pennsylvania State University that, while considered unlikely, they say could play out were humans and alien life to make contact at some point in the future.
Shawn Domagal-Goldman of NASA's Planetary Science Division and his colleagues compiled a list of plausible outcomes that could unfold in the aftermath of a close encounter, to help humanity "prepare for actual contact".

This “NASA-affiliated scientist and colleagues at Pennsylvania State University” present some scenarios about how encounters with an extra-terrestrial civilisation might unfold, all of which can easily be gleaned from reading a few issues of Astounding, Asimov’s Science Fiction, or Interzone.  The kicker comes near the end:

"Green" aliens might object to the environmental damage humans have caused on Earth and wipe us out to save the planet.  "These scenarios give us reason to limit our growth and reduce our impact on global ecosystems.  It would be particularly important for us to limit our emissions of greenhouse gases, since atmospheric composition can be observed from other planets," the authors write.

You just can’t make this stuff up.
Seriously, NASA has to question the quality of the scientists with whom they associate.  And anyone playing Penn State this year – be sure to check out whatever Sci Fi Con that may appear in your area so that you can stock up on costumes when you take on the Nittany Lyleks.
The attached photo indicates that even the Guardian feels the story less than worthy of comment. 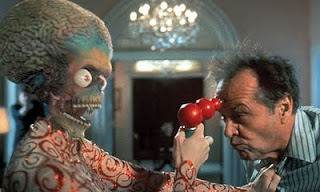 (H/T to Conservative Wanderer)
Posted by Nicholas Darkwater at 12:04 AM