The Obama administration is becoming increasingly known for its intrusion into and control over areas involving freedom of speech, particularly in that area which the First Amendment was primarily (I would argue exclusively) concerned, political speech. 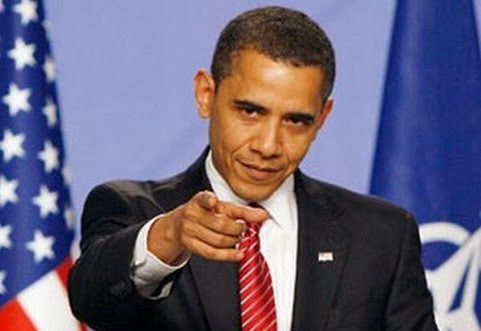 The shot across the bow of organizations that dared to criticize him and his regime came during Obama's 2010 State of the Union address, with his complaint about the Supreme Court's fresh decision in Citizens United vs. Federal Elections Commission (2010), uttered with the assembled Court sitting directly before him, which hit the news not for this crass effrontery but for Justice Samuel Alito being seen to mouth "not true" in response.  The Citizens United case allowed that corporations and organizations, through funding political speech, constitutes a form of speech rights (my one voice may not be much, but I can donate to an organization with a louder bullhorn).  Indeed, one can add that the fact that this gives vent to conservative groups in an area already dominated by left-wing labor unions and other such organizations like the corporations that run the Establishment Media.

Following along with this intimidation of conservative speech sees the Justice Department investigating some twenty reporters of the Associated Press as well as James Rosen of Fox News.  The incredible response from Justice was that Rosen was alleged to be a "criminal co-conspirator" and a "flight risk", and that the undisclosed warrant to tap his phone lines was in order because Rosen's "voluntary production of the materials … was futile", and therefore the charge was justified in order to obtain the warrant.  In other words, it doesn't matter if there is reasonable cause; what matters is that Justice utters the magic words that will obtain the warrant.  The investigation still continues.

The Citizens United finding led to a backlash, I believe, of the IRS investigating the intent of conservative groups in their request for tax exemption as 401(c)(4) groups, and the resultant stonewalling and delay, in many cases for years, which prevented these groups from effective fundraising against Obama and other Democrats in the 2012 election, with only a bare token effort toward left-wing groups (over 200 conservative groups against 6 'progressives' inquired into, with none of the left-wing groups eventually hindered).  The investigation still continues.

The National Labor Relations Board declares that companies such as Boeing cannot build plants in Right To Work states such as South Carolina because that would be deleterious to the labor union in its home state of Washington.  This is over and above the fact that now two federal appellate courts have ruled that Obama's excuse of appointing friendly board members violated the Constitutional meaning of a Senate recess appointment.  The board members are still serving nonetheless.

Complaints about the EPA and NSA are legion yet still ineffective (as those above), and now comes the Federal Communications Commission, in an exposé from one of its own commissioners, no less.  Ajit Pai, writing in the Wall Street Journal, discloses a potentially insidious initiative to place researchers (one could easily call them monitors) into the newsrooms of media outlets in order to investigate the decisions of how stories come to be chosen and written, with the "Multi-Market Study of Critical Information Needs [CIN]", which would encompass some 280 news organizations.


The purpose of the CIN, according to the FCC, is to ferret out information from television and radio broadcasters about the "process by which stories are selected" and how often stations cover "critical information needs," along with "perceived station bias" and "perceived responsiveness to underserved populations."

'Bias' according to whom?  'Perceived' according to whose perception?  Newsrooms will be examined on their diversity of personnel ("What are the demographics of the news management/on air/news production staff?").  A question in which Al Sharpton would likely be interested: "How much does the community input influence news coverage decisions?"  (My response and theirs as well, I would hope: "None at all; let the market decide.")  Office politics are solicited: "Have you ever suggested coverage of what you consider a story with critical information for your customers (viewers, listeners, readers) that was rejected by management?"  "What was the reason given for the decision?"

What exactly is 'critical information'?  The eight categories include public health, politics, transportation, the environment, and economic opportunities.  That may be innocuous to some, but imagine the reaction if the Bush administration had begun this initiative of putting researchers ("a rose by any other name…") from the agency responsible for your business license into your office, questioning your employees about your business and your decisions?  The term 'chilling effect' is not mentioned, but I do see "frightening implications" from Fox News, and Pai blasted the proposed study with "The government has no place pressuring media organizations into covering certain stories."

Tom Wheeler, the Chairman of the FCC, quickly tried to backtrack with "The Commission has no intention of regulating political or other speech of journalists or broadcasters by way of this research design, any resulting study, or through any other means.  The research design is a precursor to any formal study.  If used in any way, its goal would be similar to those of past reports seeking to identify whether potential market barriers exist and, if so, whether these barriers affect diversity of media voices."

Key word: "intention".  But the result would be to "identify barriers [that] affect diversity of media voices".  In other words, to slip in another Fairness Doctrine, created in 1949 but disestablished in practice in 1987 and by law in 2011, which led broadcasters to quickly discard any controversial or political topic rather than to air dissenting voices that met the 'perceived' needs of any variety of special groups.

Note also, and particularly, that the study encompasses newspapers, which the FCC has no authority to monitor.

The National Association of Broadcasters announced that they "were concerned that the diffuse, multifaceted focus of the research has the potential to undermine its usefulness for any particular purpose."

How genteel.  After the AP and Rosen cases affecting the news organizations themselves, will even the Establishment Media now begin to take note and rail against excesses by the Obama administration?  Any one of the above excesses (among others) by government agencies beholden to the internal political make-up of their career bureaucrats and the administration directors in power, would be enough to raise the hackles of anyone concerned with free speech, but all of them in their steadily accumulating mass must somehow reach critical proportions at some point.

As Ronald Reagan once quipped, "The nine most dangerous words in the English language are 'I'm from the government and I'm here to help.'"  How much worse are "…and I'm here to study you."?

*****
Update:  The FCC is backing off, not with the survey, but with some of the intrusive questions.  See the comments below.

Posted by Nicholas Darkwater at 4:29 PM