Corporal Todd S Love, USMC was assigned to 1st Platoon, B Company, 1st Reconnaissance Battalion in Helmand Province, Afghanistan, when he volunteered to take over the point position during a patrol in Sangin on 25 October 2010.  He doesn’t remember the explosion that blasted away his legs when he stepped on a pressure plate that detonated the IED.  The platoon Corpsman reached him within moments and expected to find that Love was likely dead, but instead he detected signs of life.  As he was giving him morphine, Cpl Love regained consciousness and started talking to the Corpsman about his injuries, knowing that his legs were gone, but glad to hear a favorable reply to the usual question.  He then asked about his team leader, Cpl Kyle Thompson, who was hit in the face with shrapnel and lost an eye.  In keeping with the dark humor so common among the men in ‘high speed, low drag’ combat units, Love yelled, “Thompson!  Thompson!  Hey, it sucks to be you right now!”

The heat of the blast had fortunately (all things considered) cauterized his massive wounds, so the Corpsman was able to keep him alive for the hour and twenty minutes it took for the British medevac helo to arrive, and Love’s second stroke of luck was that the helo was able to lift off and exfil despite the large volume of ground-fire, including multiple RPGs, that were directed at it, the door gunner and Love’s Marine cohort being actively engaged throughout.

It was good fortune that kept him alive, but after that, as they say, you make your own luck.

Love’s touch of gallows humor was a clue to the enormous fortitude that sustained him through the months of attention and rehabilitation that took him through care at Landstuhl, Bethesda, and Walter Reed, including the surgeon’s decision that his left hand would also have to amputated below the elbow.  How does someone bounce back, or even cope, with the thought of re-learning to live life as a trimembral amputee?  Here’s an example: 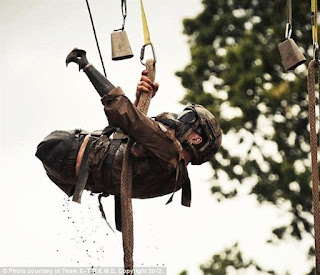 Cpl Love participated last Wednesday in the Spartan Heroes Heat in Leesburg, Virginia as a member of Team X-T.R.E.M.E. (Train, Rehabilitate, Empower, Motivate, Endure), one of eight team members that included Army SGT Noah Galloway (late of B Co, 1/502nd Parachute Infantry, 101st Airborne Division), who lost his left leg and left arm in Iraq, and Marine Sgt Jonathan Mozingo (3rd Battalion, 6th Marines, 2nd Marine Division), who lost his left leg in Marjah, Afghanistan.  The course is a demanding 10.5-mile muddy gauntlet that includes 75 obstacles, five and a half hours of self-imposed torture, and as if that isn’t bad enough, in order to make it ‘sporting’ (and mainly as an homage to veterans) the team dons blacked-out gas masks to cut down on vision and restrict some 20-30% of oxygen intake. 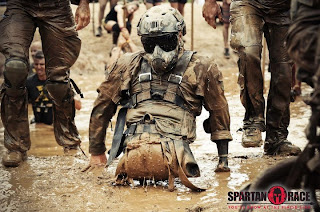 This is a singular and inspiring accomplishment for someone with Todd Love’s limitations, who approaches them as obstacles like any other to be overcome.  His infectious good humor and attitude should be an inspiration to the most cynical and jaded, yet he isn’t just a one-trick pony, even though it be of Clydesdale proportions. 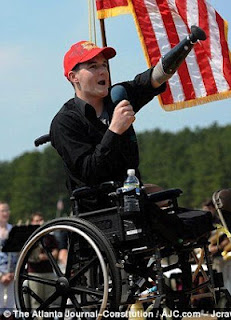 Love does a remarkable turn at the piano of C P E Bach’s Solfeggietto, that warm-up mainstay of concert pianists because of its complexity and rigid meter.

He lives out one of his life’s dreams by wrestling an alligator.

He also goes snowboarding on a device that he helped design:

Then he does a tandem parachute free-fall with Michael Elliot, formerly of the Army’s Golden Knights Parachute Team, and parachute buddy of President George H W Bush (Cpl Love had earned his Marine gold paratrooper wings about two weeks before his incident with the mine), while participating in another extreme endurance meet on northeast Oahu.  The dark humor was still evident during the ride to altitude (9000 feet): “When you land, don’t forget to pick up your feet.”  “Don’t worry if we have a high-speed malfunction; we’ll have the rest of our lives to figure it out.”  Seeing him do push-ups will help you understand how he later goes surfing and scuba-diving.

So, what was that problem you were whining about?

And why is it that I learn of this from the Daily Mail, a British newspaper?  The only US national coverage I can find is from the Huffington Post, of all places.